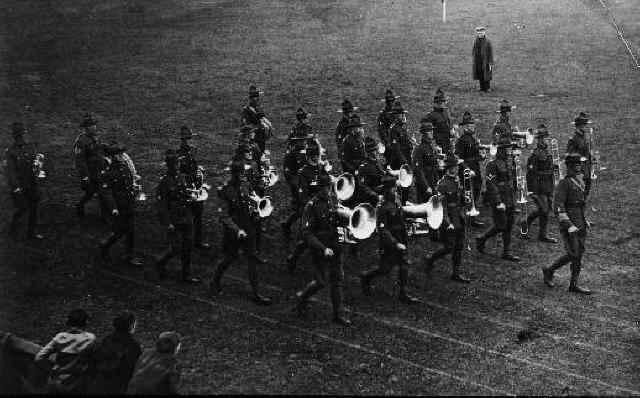 I have recently made contact with Nelson City Brass in New Zealand on a hunch that when our first Musical Director, Thomas Henry Hughes, emigrated there he may have been connected in some way, Nelson City Brass are one of the oldest bands in NZ being founded in 1857 and one of their old photographs show them marching in 1932 wearing the very distinctive uniform Tom Hughes senior is wearing in the picture here.

The contact with Nelson City Brass turned up an immediate result, and I had this email by return from their secretary…

Good news, it appears that these blokes were well known.

I understand Tom Hughes senior was the conductor of the Nelson Band for some time and both he and his son were life members.

We have a chap playing in the band who is 93 years old and still going strong. I will show him your email at band on Thursday and see if he can send you some details etc of these guys as he will no doubt have a lot of knowledge on their time in Nelson and in the band.

So it seems that after leaving for New Zealand Thomas Hughes involved himself in the brass band movement with just as much vigour as he did in East Peckham.